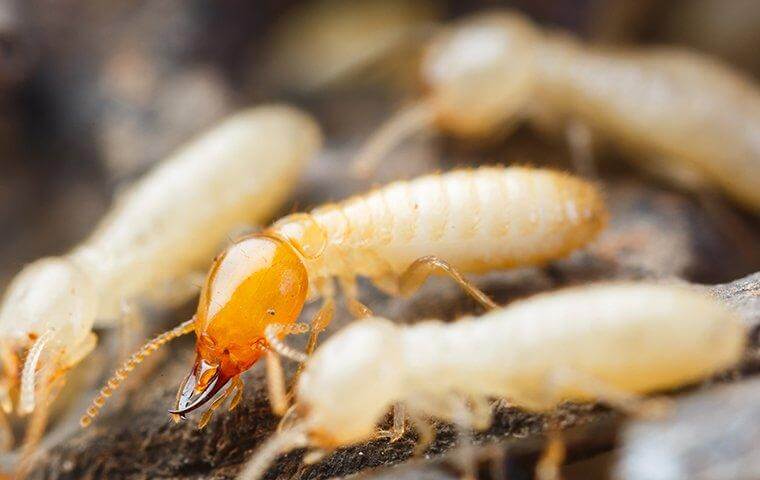 Across America, homes typically come under attack by one of three termite species: subterranean termites, Formosan termites, and drywood termites.

Subterranean termites are the most common termite found across the U.S., found in every part of the country except the northernmost states. As their name indicates, subterranean termites live underground in large colonies with populations that can number into the millions. From there, they’ll get into homes’ wooden floors and foundations in search of food.

Formosan termites are localized to the southern part of the country. While they are also subterranean, they are differentiated from Eastern subterranean termites by their longer bodies, shorter heads, and short pincers on their heads.

Most common to coastal regions, drywood termites do not make colonies under the soil but instead live inside wood, getting the moisture they need from humid air around them. Drywood termite soldiers and workers are generally larger than their subterranean counterparts, with black heads on soldiers instead of the yellow-orange ones found on subterranean soldiers.

All termites, no matter what species or classification, are insects. Every termite will have two antennae, six legs, and three body segments (a head, thorax, and abdomen). The antennae of the termite look like several tiny balls stacked on top of each other, jutting out of their head in a slight curve or straight line. Termites have six legs, two protruding from the thorax and four from the abdomen.

At a distance, termites can often be mistaken for ants. However, unlike ants, termites do not have three distinct body segments. The thorax and abdomen appear as one, giving the appearance that these insects have only two parts, a head, and a body.

All termites colonies are broken up into three castes: workers, soldiers, and reproductives.

Of all termites, workers are the ones most likely to be seen as they are the most numerous throughout a colony. These are the termites that will work their way up into your home and chew their way through the wood inside your walls.

Termite workers are most often seen during the renovation of a home or when dead trees are removed from a property.
Worker termites are generally pale, slimy, and featureless. Worker termites have translucent skin and are teardrop in shape. They get this shape because their head is slightly smaller than their abdomen. From a distance, they can appear to be maggots.

These are the termites that protect a nest using their large dark brown pincers on their heads. The rest of their bodies are usually yellow in coloration but can be brown in some cases. Soldiers are most commonly seen if you disturb a termite nest.

Of all the termite castes, reproductives, also known as swarmers or alates, is the caste you are most likely to see. When a nest matures, a queen will begin to produce male and female reproductives that sprout wings and perform mating flights to create new colonies. Reproductive termites are born with four large white wings that stack on their back and appear twice as large as their tiny bodies.

Most swarmers are black, but some species can appear brown. These termites will come in a swarm and will appear on exterior walls and window sills in large numbers. Often, swarmers are a sign that a mature termite colony is already in the walls of a home or business. Likewise, the presence of their discarded wings around a property is usually one of the first signs of an infestation

Unfortunately, even if you know what to look for, defending your home from termites on your own can be a difficult or even impossible task for most homeowners. Most termite infestations happen underground and out-of-sight, so even if they’re all over your home, you probably won’t see them until it’s too late.

Don’t leave your home at risk: contact the professionals at Pestmaster® Services today for a comprehensive termite inspection and treatment. We’ll use the latest in termite identification and elimination technologies to keep your home termite-free for the future. Give us a call today for more information.