Warm weather usually means sunlight and outdoor activities, but stinging insects can ruin the festivities quickly if you don’t take steps to protect your property. When wasps and hornets start swarming, homeowners across the United States have to prepare themselves against the sting of summer. Refer to this guide for common stinging insects found in our area.

Baldfaced hornets are wasps physically similar to yellow jackets due to their black and yellow coloration and similar body shape. However, at 1/2-5/8 of an inch long, these hornets are both bigger and more aggressive than their stinging insect relatives. 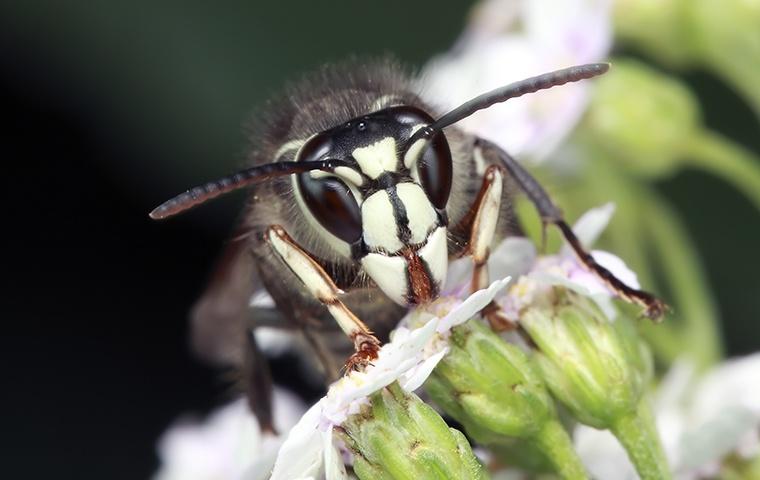 Baldfaced hornets are incredibly territorial and their stings can be extremely painful, causing itching and swelling for over 24 hours in most cases. They can also cause severe allergic reactions in many people requiring medical attention.

Why Do I Have a Baldfaced Hornet Problem?

Similar to paper wasps, baldfaced hornet infestations can be identified by the presence of paper-like hornet nests suspended above the ground in close proximity to the property, usually hanging from overhangs and utility poles or attached to sheds.

How Do I Get Rid of Baldfaced Hornets?

Cicada killers are a species of wasp similar to hornets, with yellow and black markings on all three of their body segments. Cicada killers are often mistaken for European hornets due to their similar appearance but can be differentiated by their pale red or orange legs. Cicada killers are named for their tendency to hunt cicadas, which are short-horned grasshoppers. While this makes cicada killers beneficial to the environment, it doesn’t stop them from putting homeowners they come into contact with at risk. 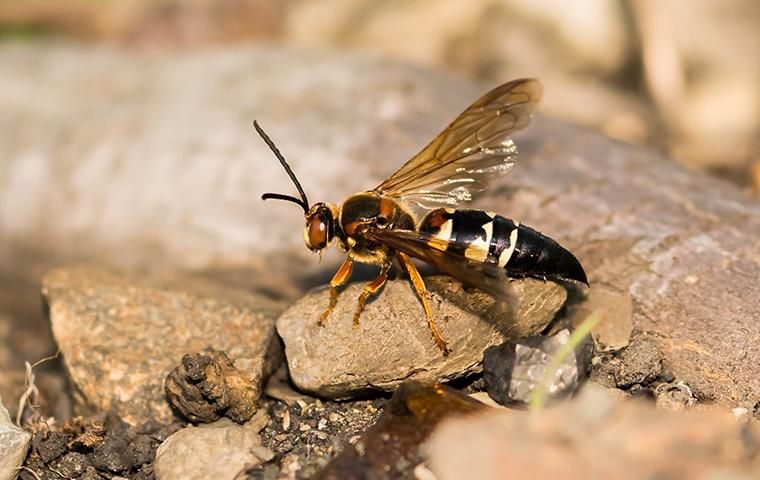 Cicada killers do not carry diseases and are primarily considered a nuisance due to their noisy and messy behaviors. However, while human stings are uncommon, they are still possible.

Why Do I Have a Cicada Killer Problem?

Cicada killers tend to invade sunny spots around homes where cicadas congregate. They will then dig tunnels into the ground, disturbing plants and gardens in the process. If your backyard is conducive to other insects, expect cicada killers to be on their heels.

How Do I Get Rid of Cicada Killers?

Pestmaster® technicians have a long history of keeping stinging insects at bay for homeowners across America. If cicada killers are turning your summer into a nightmare, contact us to find out how one of our professional stinging insect treatments can help.

Mud daubers are small wasps with black or brown bodies, distinctive yellow limbs, and two pairs of powerful wings. Unlike other wasps that make huge colonies, mud daubers are more solitary, constructing individual nests out of mud tubes, giving them their name. They typically range in length from 3/4-1 inch. Mud daubers appear uniquely thin compared to other wasps. 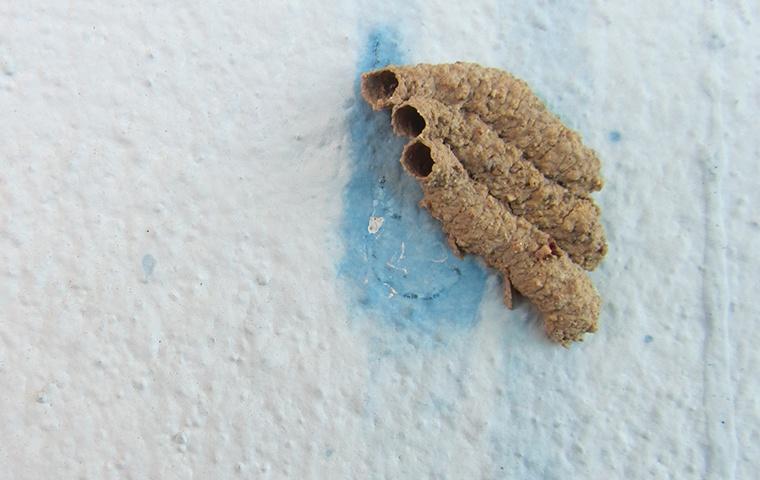 As they rarely defend their nest by stinging, mud daubers are generally considered to be nuisance pests. However, like any stinging insect, their venom can cause an allergic reaction in people that can become quite serious and require medical attention.

While mud daubers are not considered as aggressive as other stinging insects, caution should still be taken around them so that a sting does not accidentally occur.

Why Do I Have a Mud Dauber Problem?

Mud daubers are usually found in and around human dwellings, as these can provide exceptional shelter for their mud tubes. Mud daubers are often found under porches, decks, eaves, and in garages, sheds and attics.

How Do I Get Rid of Mud Daubers?

Mud daubers can be a difficult and dangerous pest to attempt to treat alone. Contact the stinging insect experts at Pestmaster® for info about how one of our comprehensive pest control programs might be the perfect solution to your mud dauber dilemma.

Paper wasps are small flying insects known for their bad attitudes and painful stings. Their name is derived from the distinctive umbrella-shaped nests they make by combining their saliva with dead wood and plant stems they collect in the wild. Paper wasps are semi-social insects, with each nest holding between a few dozen to several thousand individual wasps. They range from 5/8-3/4 of an inch in length, with two antennae and six long, segmented legs. They are brown-red in coloration with yellow markings along their bodies. Their diet largely consists of plant nectar and other small insects.

Despite their reputation, wasps are not as aggressive as other types of stinging insects and generally will not attack humans or animals unless they feel that their nest or they themselves are threatened. However, because their territory may not be immediately obvious, it is quite possible to enrage the nest by accident, incurring their wrath in the process.

Beyond being painful, paper wasp stings can cause severe allergic reactions in some people, and can even cause fatal anaphylactic shock. If a person is swarmed by several wasps at once, they will require immediate medical attention.

Why Do I Have a Paper Wasp Problem?

Paper wasps are a common site in residential yards across the United States, especially in summer and fall. Beyond coming into direct contact with them, seeing their distinctive nests around your property is a sure sign that they’re in the area. They can also be attracted to uncovered food or strong fragrances.

Paper wasps can be attracted to yards with overgrown shrubs or hedges, fruit trees, and other insects present, all of which can serve as potential food sources. After their fall breeding period, female paper wasps will often seek warmth and shelter inside homes and other buildings.

How Do I Get Rid of Paper Wasps?

Due to the hazards associated with paper wasps and the painful stings they will give to anyone caught near one of their nests, paper wasps should only be removed from your home and property with the help of professionals. If paper wasps are turning your yard into a nightmare, don’t wait: contact Pestmaster® for help and take the sting out of summer.

Yellow jackets are small stinging insects, similar to wasps in appearance but with black heads and a distinctive black and yellow pattern across their abdomens. Adult yellow jackets are about 3/8-5/8 of an inch in length, have six legs, and two segmented antennae. They have lance-like stingers with small barbs on them and are capable of stinging their victims multiple times in quick succession. Beyond their distinctive appearance, yellow jackets can be identified by their characteristic side-to-side flight pattern they make prior to landing on any surface.

Where Will I Find Yellow Jackets?

Yellow jackets are social insects that live and work together in nests that are well-concealed, often built underground. These colonies can become very large, sometimes having more than 4,000 workers associated with a single colony. Yellow jackets are found in homes and yards across the United States.

Like other stinging insects, yellow jackets are fiercely territorial and will deliver painful stings to any people or animals they feel threatened by. The venom from a yellow jacket sting can trigger severe allergic reactions in certain individuals, which can lead to serious health problems and require immediate medical attention.

Why Do I Have a Yellow Jacket Problem?

Yellow jacket colonies reach their peak numbers in the late summer and early fall. They are often attracted to sweets and protein-based foods, which can attract them to homes as well as outdoor gatherings such as festivals, picnics, and barbecues.

While they will often build outdoor nests underground, when they get inside homes they will build nests under eaves, behind wall voids, and in attics. Indoor yellow jacket infestations can lead to numerous and severe stings for people unfortunate enough to be living inside.

How Do I Get Rid of Yellow Jackets?

Due to the health hazards and pain that their stings provide, it is recommended that the average homeowner not try to handle their yellow jacket problems on their own. Instead, we recommend enlisting a professional pest control company for help. If your lawn has been colonized by yellow jackets, don’t try to take them on alone: contact the professionals at Pestmaster® and find out how our expert stinging insect elimination programs can help you take back your yard.