What are pavement ants?

Pavement ants are one of the most common types ants found in urban and suburban habitats. Pavement ants range in color from dark brown to black, growing to about 1/8 of an inch long, though queens can grow significantly larger. They have antennae with 12 segments. One of their antennae has 3 segmented clubs on the end. They are distinguishable by the parallel grooved lines that run down their bodies from head to thorax along with the spines that protrude from their thoraxes. 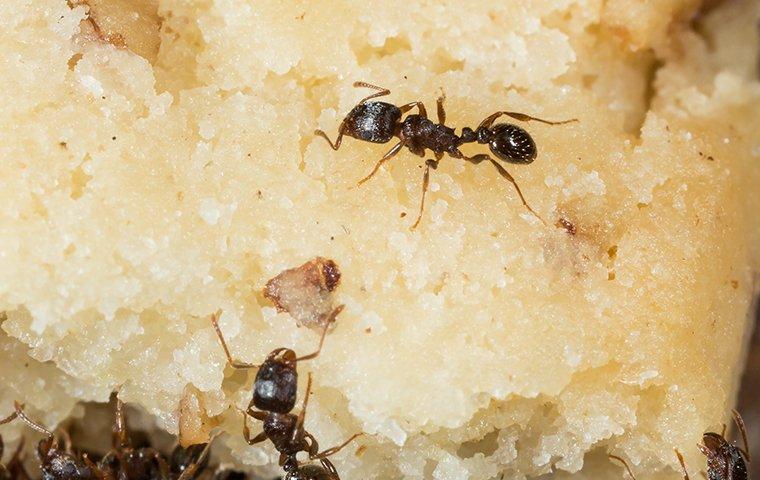 Where will I find pavement ants?

Pavement ants are named for where they’re primarily found: on sidewalks, in the cracks of driveways, and around other concrete structures. As foragers, they are excellent at getting into cracks and expansion joints found in slabs.

Pavement ants are not considered to be a dangerous ant. While they can both sting and bite, pavement ants are a comparatively docile species of ant that are non-aggressive and rarely come into direct contact with humans.

On the other hand, while they pose little direct threat, they are a considerable nuisance pest and can pose an indirect threat through the food items they invade and contaminate. If they find their way into your home, pavement ants will feed on meats, grease, nuts, and cheese.

Why do I have a pavement ant problem?

Pavement ants are typically found living outside forming nests along sidewalks. In their quest for food and water, they will make their way to the concrete foundations of homes and create nests underneath flooring or in insulation found behind walls.

How do I get rid of pavement ants?

Pavement ants are a difficult pest to get rid of because of the large number of ants present in their colony and their ability to get into areas of the home that are typically out-of-reach to the average homeowner. Luckily, the team at Pestmaster® Services has all the tools and know-how necessary to prevent and eliminate any pavement ant infestation. If you have pavement ants on your property, contact us today to discuss our comprehensive ant control plan.