What are paper wasps?

Paper wasps are small flying insects known for their bad attitudes and painful stings. Their name is derived from the distinctive umbrella-shaped nests they make by combining their saliva with dead wood and plant stems they collect in the wild. Paper wasps are semi-social insects, with each nest holding between a few dozen to several thousand individual wasps. They range from 5/8-3/4 of an inch in length, with two antennae and six long, segmented legs. They are brown-red in coloration with yellow markings along their bodies. Their diet largely consists of plant nectar and other small insects. 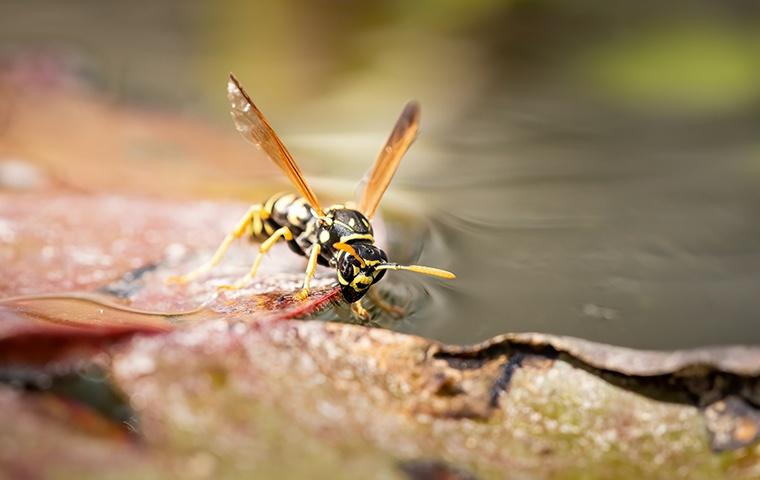 Despite their reputation, wasps are not as aggressive as other types of stinging insects and generally will not attack humans or animals unless they feel that their nest or they themselves are threatened.

However, because their territory may not be immediately obvious, it is quite possible to enrage the nest by accident, incurring their wrath in the process.

Beyond being painful, paper wasp stings can cause severe allergic reactions in some people, and can even cause fatal anaphylactic shock. If a person is swarmed by several wasps at once, they will require immediate medical attention.

Why do I have a paper wasp problem?

Paper wasps are a common site in residential yards across the United States, especially in summer and fall. Beyond coming into direct contact with them, seeing their distinctive nests around your property is a sure sign that they’re in the area. They can also be attracted to uncovered food or strong fragrances.

Paper wasps can be attracted to yards with overgrown shrubs or hedges, fruit trees, and other insects present, all of which can serve as potential food sources. After their fall breeding period, female paper wasps will often seek warmth and shelter inside homes and other buildings.

How do I get rid of paper wasps?

Due to the hazards associated with paper wasps and the painful stings they will give to anyone caught near one of their nests, paper wasps should only be removed from your home and property with the help of professionals. If paper wasps are turning your yard into a nightmare, don’t wait: contact Pestmaster® Services for help and take the sting out of summer.

Is It Possible To Have Bed Bugs In My Reno Business?

The Problem With Pavement Ants On Your Reno Property