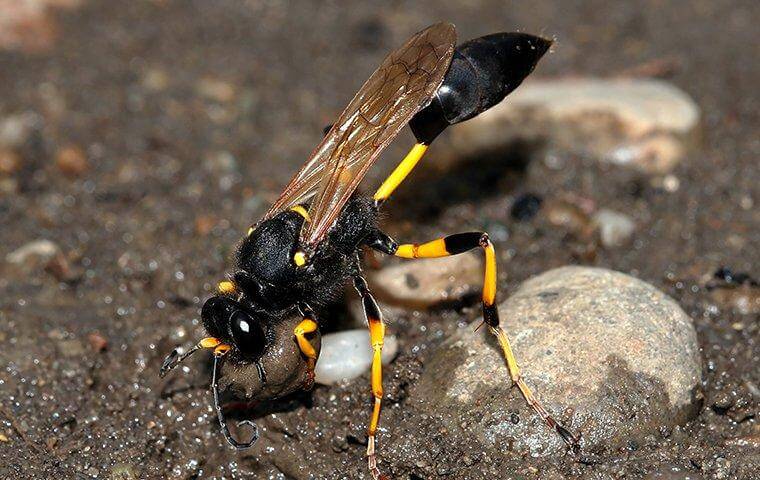 Have you ever seen a flying insect around your home and wondered whether it could sting you? Some of these pests are more recognizable such as the bumbling bumble bee or the sleek yellow jacket, but there are other wasps in Syracuse that you might not recognize. One of these species is the mud dauber, and if you see one, you might be afraid of being stung. In this guide, you will learn more about these wasps, what they look like, and how to keep them away from your property. You’ll also get some handy wasp prevention tips for your Syracuse yard.

How To Identify Mud Daubers

Just like yellow jackets and paper wasps, mud daubers are a kind of wasp. There are a variety of specific mud dauber species, but they do share many of the same attributes. One of the best ways to identify mud daubers is by their nests. They create small “cells' ' about an inch wide out of the mud.

Mud daubers also have thin, long bodies with a thread-like “waist” that attaches their thorax to their abdomen. They are often black, but they can have some light markings or even a metallic blue sheen. The color of mud daubers makes them distinct from many other stinging insects in Syracuse. They don’t have striped markings like bees and yellow jackets, and they can even look a bit like flying ants from a distance.

Most people can’t stand wasps because of their ability to sting. Being stung is a memorable event and not in a good way. These stings hurt, and they can sometimes be dangerous. But, the good thing is that mud daubers aren’t as harmful as compared to other wasps in the area. They aren’t aggressive, and they don’t attack to defend their nests.

Mud daubers are also a solitary species. They don't have large colonies, and, instead, the females lay eggs in the nests that they build on their own. While these pests might sting occasionally, they are mostly considered a nuisance.

Does Anything Instantly Kill Mud Daubers?

When you’re figuring out the best way to get wasp control for your Syracuse home, you might first go to the store and buy sprays or other products. Or, you might look online and find at-home remedies using products you have around. But, while some of these methods can kill mud daubers on contact, they aren’t the most effective way to remove them.

While mud daubers aren’t very dangerous, they can still be unpleasant to have about, and you'll usually need to get close enough to them to apply sprays. The other issue is that other flying insects will often take over mud dauber nests after the eggs hatch. So, you might end up being attacked by a more dangerous species if you attempt to remove their nests on your own.

Instead, make mud dauber removal simple by contacting our professionals at  Pestmaster® Services.

What Is The Best Treatment For Mud Daubers?

Contact the Syracuse pest control experts today if you’ve seen evidence of mud daubers or their nests around your yard. At Pestmaster® Services, we realize that dealing with wasps can be intimidating, and we know just how evasive these flying pests tend to be. Instead of dealing with mud daubers and other wasps on your own, give our team a call today. You can request a quote or schedule an inspection of your property.