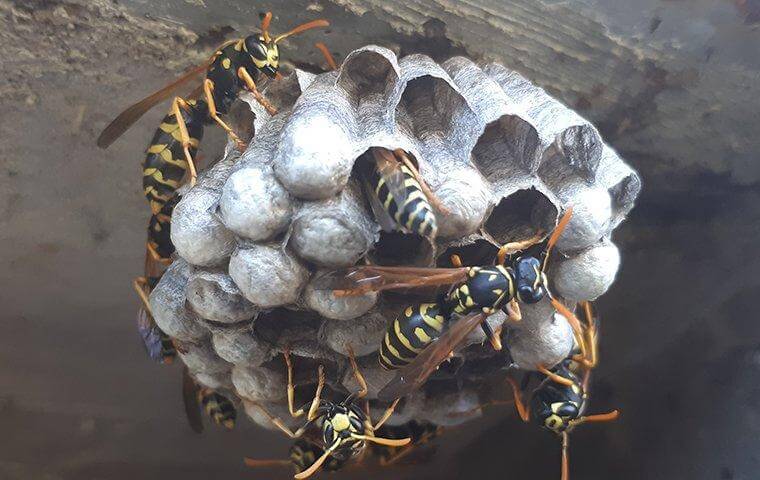 When you’re trying to enjoy time outdoors on your Syracuse, New York property, few things are as upsetting as being accosted by wasps. These stinging insects can be terrifying to encounter because their stings can be quite painful, and they can seem to fly around relentlessly with no end in sight.

Wasps are also potentially dangerous pests, so it’s important to know how to tell them apart from other similar-looking insects such as bees. First of all, it’s important to note that hornets are just a subset of wasps, so all hornets are a kind of wasp. Next, you should know that you can identify wasps over bees by looking at three main factors: shape, color, and texture.

Wasps have lean, long bodies while bees are a rounder shape. Second, wasps are usually more of a brownish color with yellow to red stripes while most bees are black with yellowish stripes. And, third, the best way to tell them apart is to look at texture. Bees are very fuzzy while wasps are smooth and shiny.

Are Wasps Beneficial To The Environment?

While you’ve probably heard that bees play an important role in the ecosystem, many people don’t realize that wasps are also pollinators. Because of this, they do play a vital role in food production for many species. Plus, wasps can also keep smaller insect species away.

However, just because wasps do have some benefits, it doesn’t mean they are safe to have around your property. Wasp stings can pose a real danger to both people and pets, and this especially true for those who are allergic to their venom. However, even if you’re not allergic, you could still end up in the hospital as many species are able to sting multiple times in a row and inject their venom over and over.

Since having wasps around can put your safety at risk, it’s a smart idea to take some preventive measures against them. While these steps won’t guarantee you’ll never have a wasp problem, they can make your property less attractive and discourage wasps from nesting.

Here are seven of the best wasp prevention tips:

How To Remove A Wasp Nest

While you might be tempted to try to remove wasps on your own, it’s very dangerous to do so. Trying to remove a nest is when you’re most likely to be stung, even if the nest looks to be inactive.

Instead of putting your safety at risk, let the professionals at Pestmaster® Services remove these stinging pests for good. We can remove any current nests and also ensure that wasps don’t return with our ongoing residential and commercial pest control services.

Get started today by requesting your free quote or calling us to learn more about our services.